Tremolo Effect Circuit for Electric Guitar or Other Musical Instruments 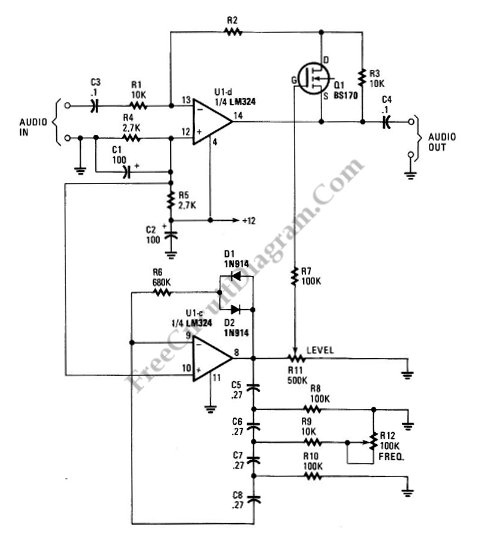 Tremolo circuit is a kind of sound effect. We can see this type of effect is applied  in guitar effect pedals.  Tremolo effect is produced if we modulate the amplitude of an audio signal. The shape of modulating signal can vary from square wave, sawtooth, or sine. When we use a square wave, then the effect produce a knocking-like sound which might be perceived like a percussive instrument. When we use sine wave then we might perceive a kind of vibrato effect which gives impression that there is a frequency modulation, but it is actually a  psycho effect because it modulate only the amplitude, not the frequency.  This tremolo circuit use very low frequency (VLF) as a source of modulating signal,  with frequency control by R12. The effect’s level, which is modulation depth,  is controlled by R11. The amplitude modulation is obtained by controlling the gain of U1D, which has feedback path through Q1 which receives signal from U1C phase oscillator.

The power supply is rated at 12V, but it actually works with 9V as well, so many standard audio effect AD-DC adapter will do the job. If you want to build a custom power supply then you can use small 15V  350 mA transformer with 7812 or 7809 integrated circuit regulator series. The total current consumption should be lower than 10mA, so you can even use smaller transformer like 21V 100mA, which is highly available on the market because it is popular for TV booster application. Be careful in selecting the 78xx series regulator, because some manufacturers specify different maximum input for this IC. A switch mode voltage regulator is not really needed for this low power application, and it has  worse noise figure than the linear one. Some audio effect pedal has battery backup to guarantee continues operation in case of powerline failure, you can add 9V battery clip to attach this backup supply, but don’t forget to provide power-on switch to disconnect the battery when it’s not used. Finally, a power indicator LED is very usable to provide power status indication.

We use cookies to ensure that we give you the best experience on our website. If you continue to use this site we will assume that you are happy with it.OkRead more