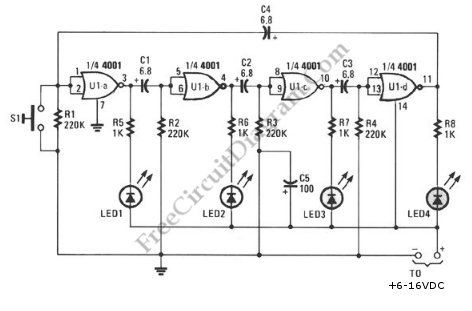 This schematic diagram shows a ring-around LED flasher circuit. This circuit will turn off two LEDs and turn on the other two until the timing cycle reverses. This circuit can be configured to flash four LEDs in sequential order  by pressing and holding S1 closed until only one of the LEDs is on then releasing it.  Here is the schematic diagram of the circuit:

This circuit can be modified by adding four more LEDs. A 4001 quad NOR gate must be added if  we want to add the number of LEDs. Just connect the additional circuit in series with the first-input to output-as an extension of the first circuit. The works of modified circuit is like four LEDs flasher circuit. Four LEDs will on and other four is off when the power is turned on. If this modified circuit is wanted to flash in sequential march in a circle, press S1 and hold closed until all but one LED turns off. [Circuit’s schematic diagram source: seekic.com]

We use cookies to ensure that we give you the best experience on our website. If you continue to use this site we will assume that you are happy with it.OkRead more